I promised to tell you about the Memorial House-Museum of Sergei Korolev. It’s time to keep the promises! This house was built in 1959 and presented to Sergei Pavlovich by the Soviet government for development and successful launch of the world’s first artificial satellite. 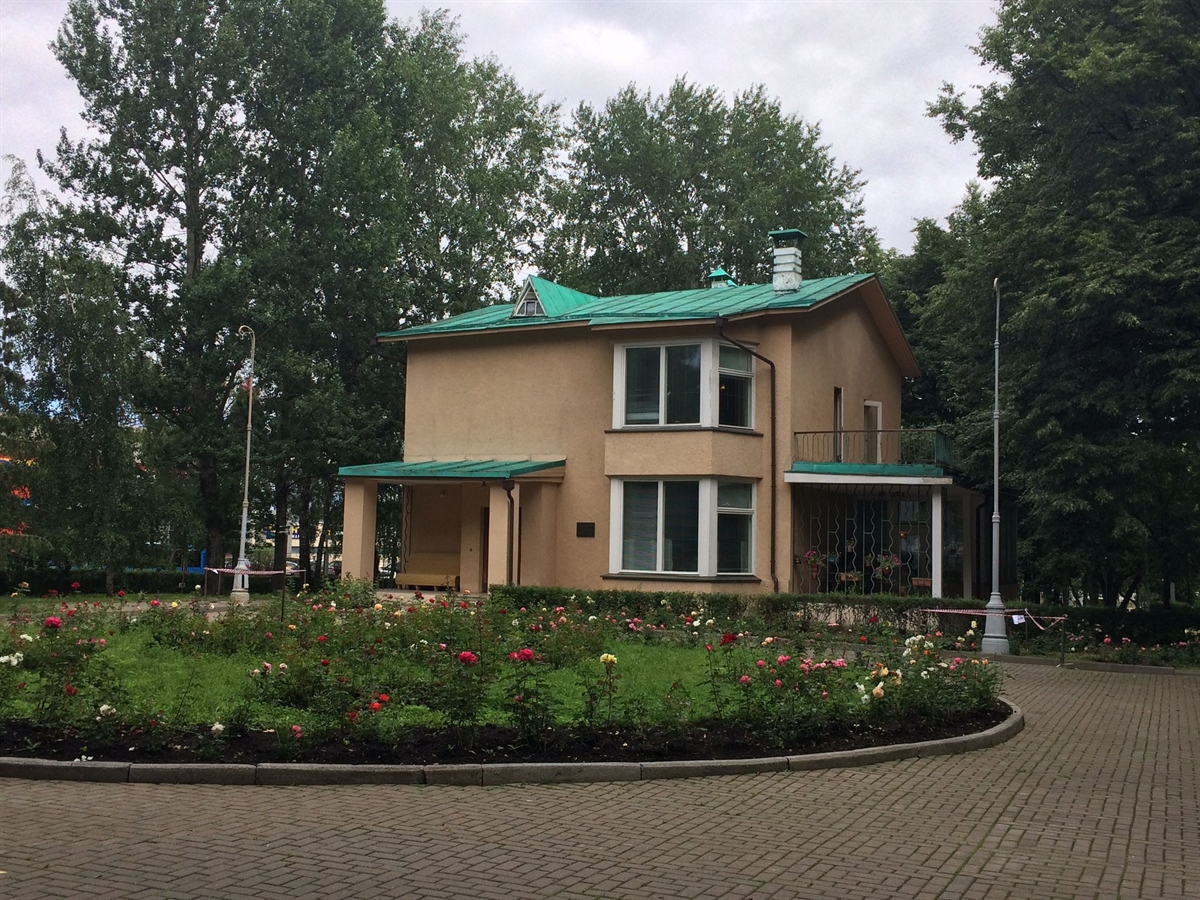 Maybe this house looks small for you, but in Soviet time it was a luxury, and it was an incredible honor to have a private house in Moscow at all. At first, Sergei Pavlovich was offered an apartment in one of nearby houses and a village cottage (we call it dacha). But he refused.

He knew exactly what he wanted, and it was a house. He even sold the apartment he used to live in. So, in 1959 the house was finished, and Korolev lived there for 6 years with his second wife, Nina Ivanovna Koroleva, until his death in 1966.

After his death, Nina Ivanovna appealed to the Soviet government with an initiative to establish a memorial museum in the house. The interior of the house has been preserved carefully, and most of the belongings are on the places where they were at the day of his death.

Sorry for the bad photos. The house is really small, and there’s sometimes no place for a photographer. On this photo you can see the cloakroom that contains the clothes Korolev wore on the January day in 1966 when he went for the surgery that led to his death. 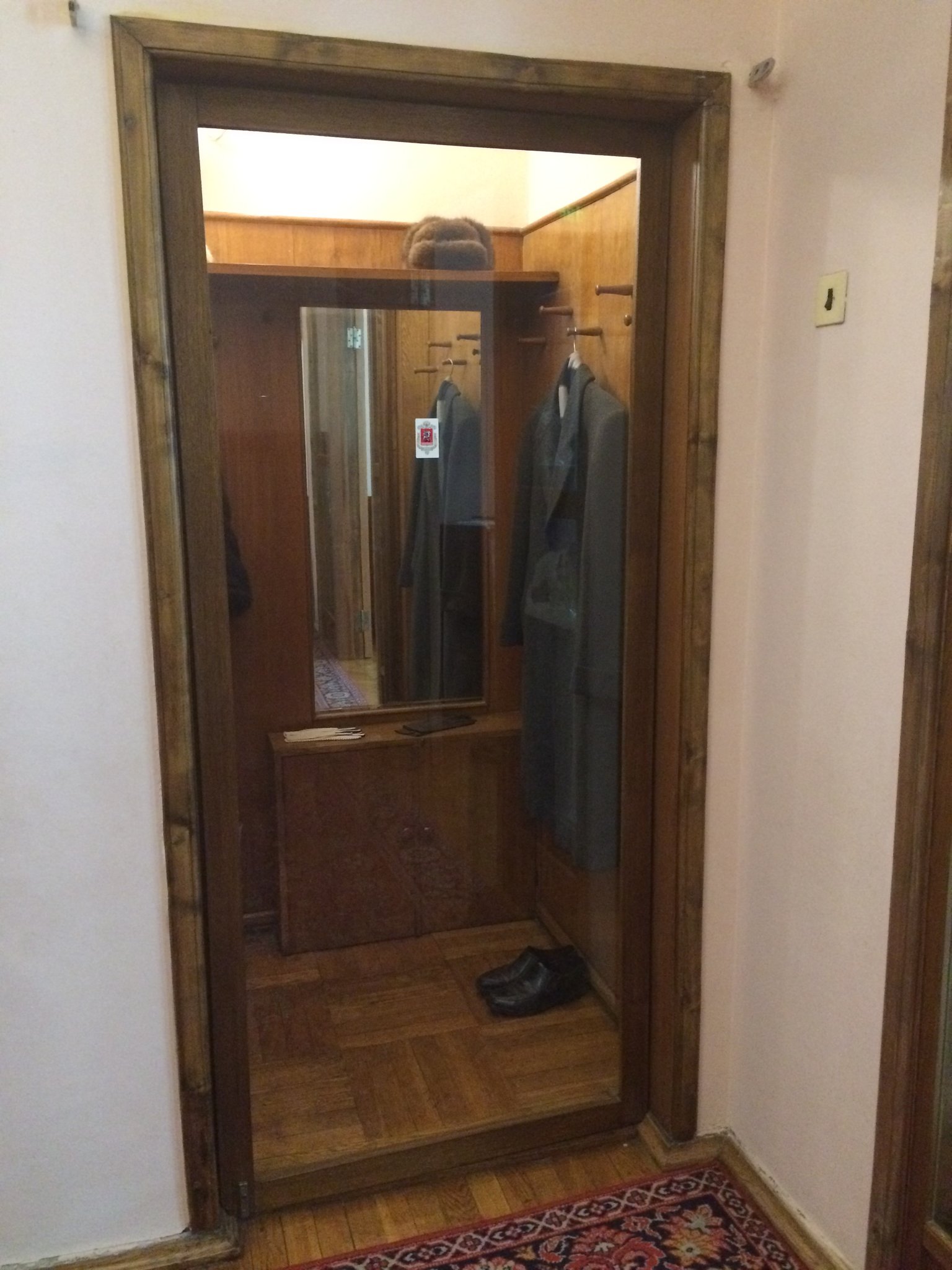 This is the living room. On the table lie the periodicals and newspapers that Korolev liked to read: Pravda, Ogonyok and Nauka i Zhizn’ (Science&Life). 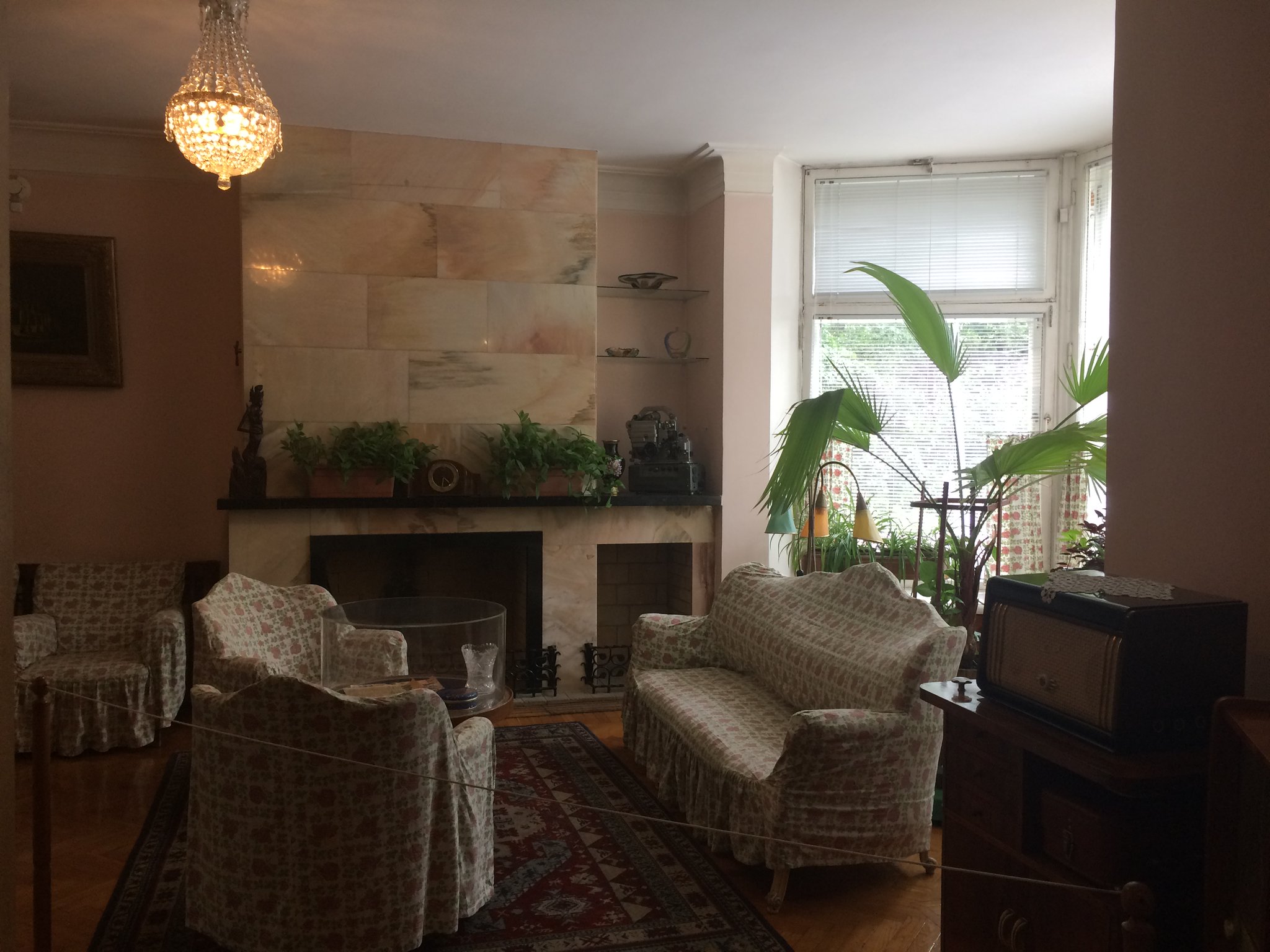 There’s a fireplace on the photo. I’ve heard a story (don’t know if it’s true), that it wasn’t used often, but once Yuri Gagarin tried to use it and did something wrong that caused smoke to spill into the room. Those traces of charcoal is a reminder of that incident.

These furniture covers are original! They were put on the furniture to keep it clean and usually never taken off.

There is a photo on the piano of Sergei Pavlovich and Nina Ivanovna. She played the piano very well. 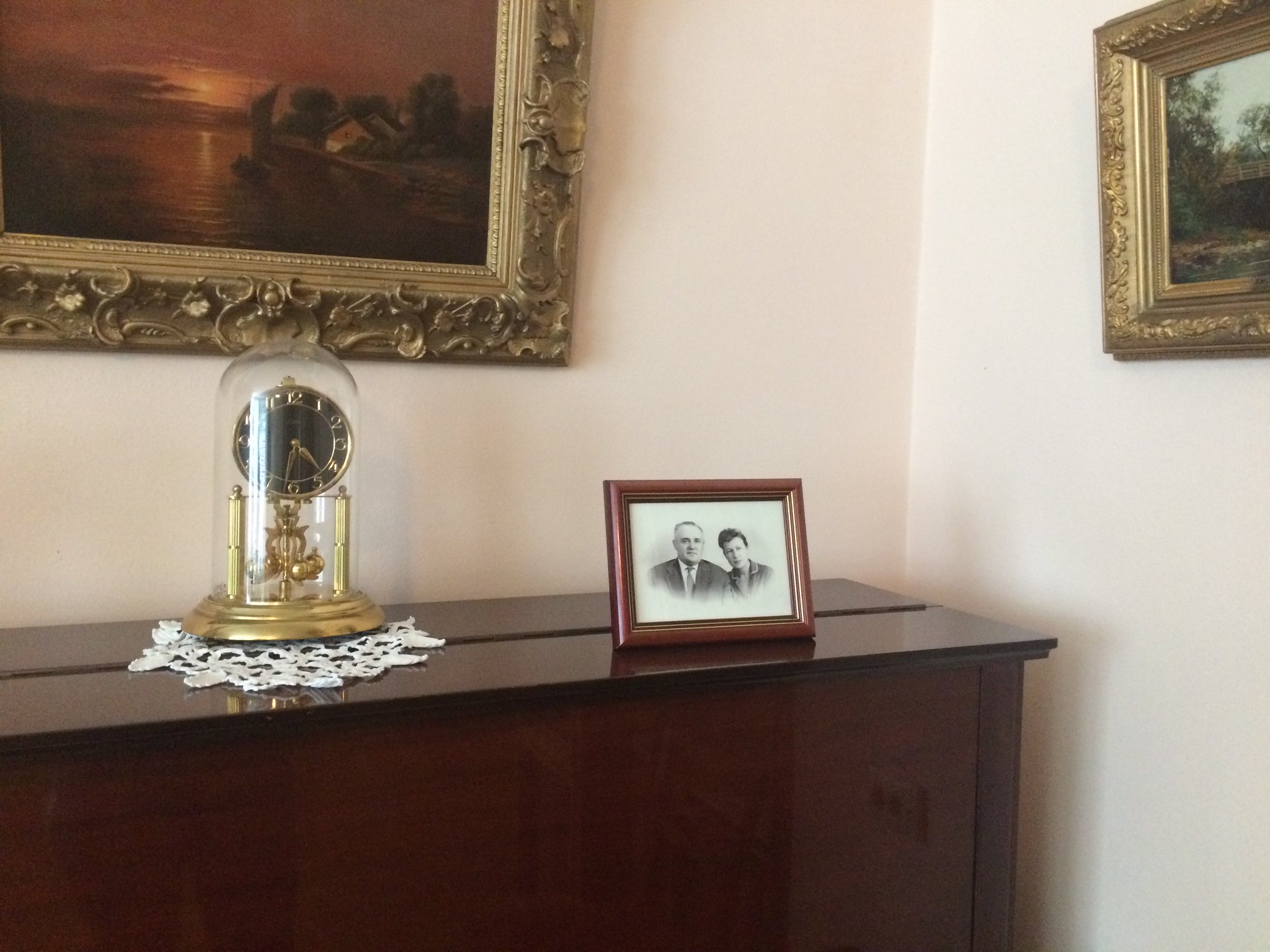 There is also a small kitchen on the first floor. Well, I said «small,» but it’s bigger than most of the kitchens that the Soviet people had in the 1960s. For example, I live in a house built at the same time and I have a kitchen of 6 square meters. 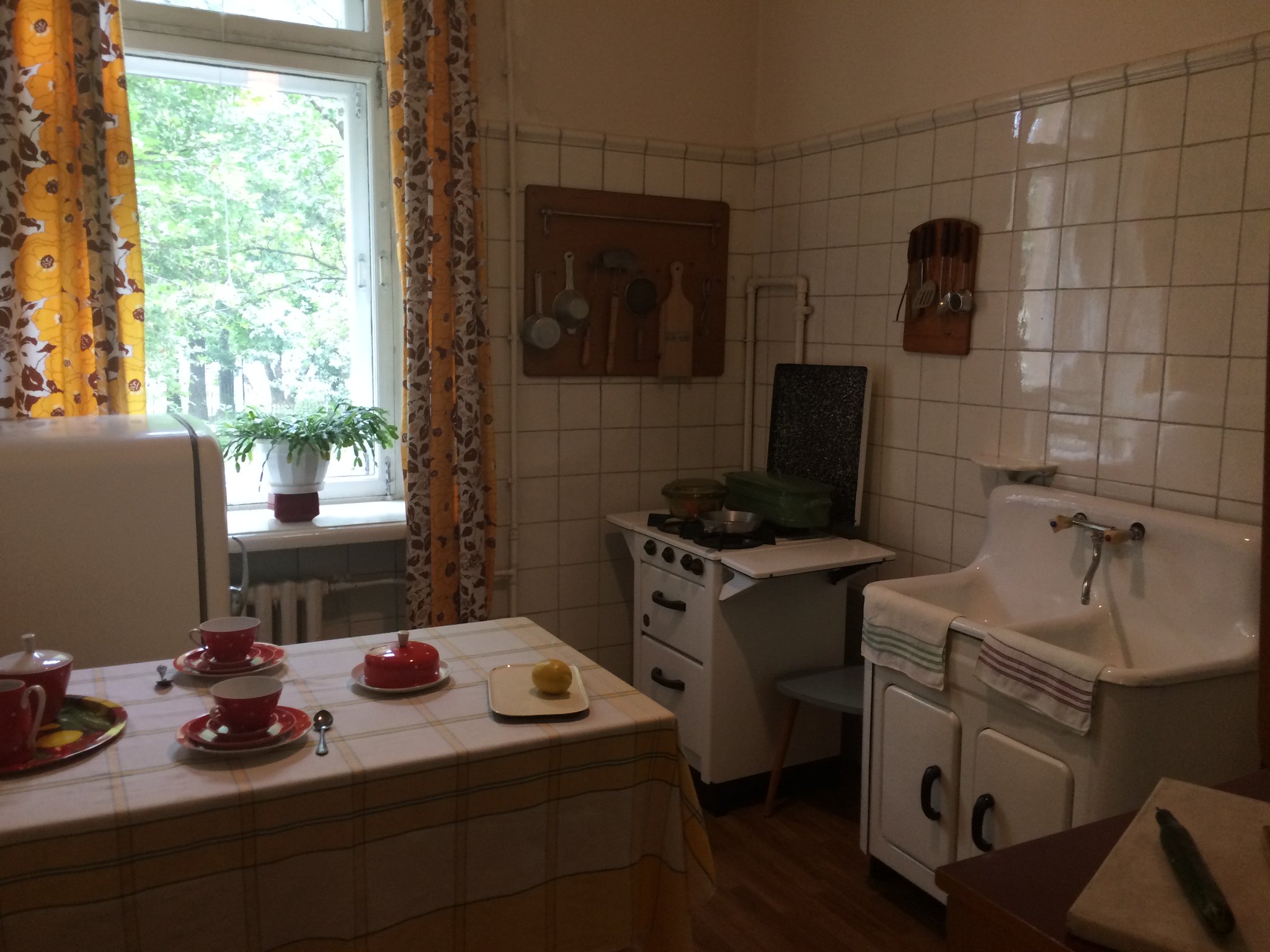 Here you can see a dining room. A rare thing in Soviet houses and apartments. We didn’t usually have room for it, so we used to eat in the kitchen (and Sergei Pavlovich also pereferd to do so, when there were no guests). A radio placed in the corner is an old one, «Telefunken» made in Germany. 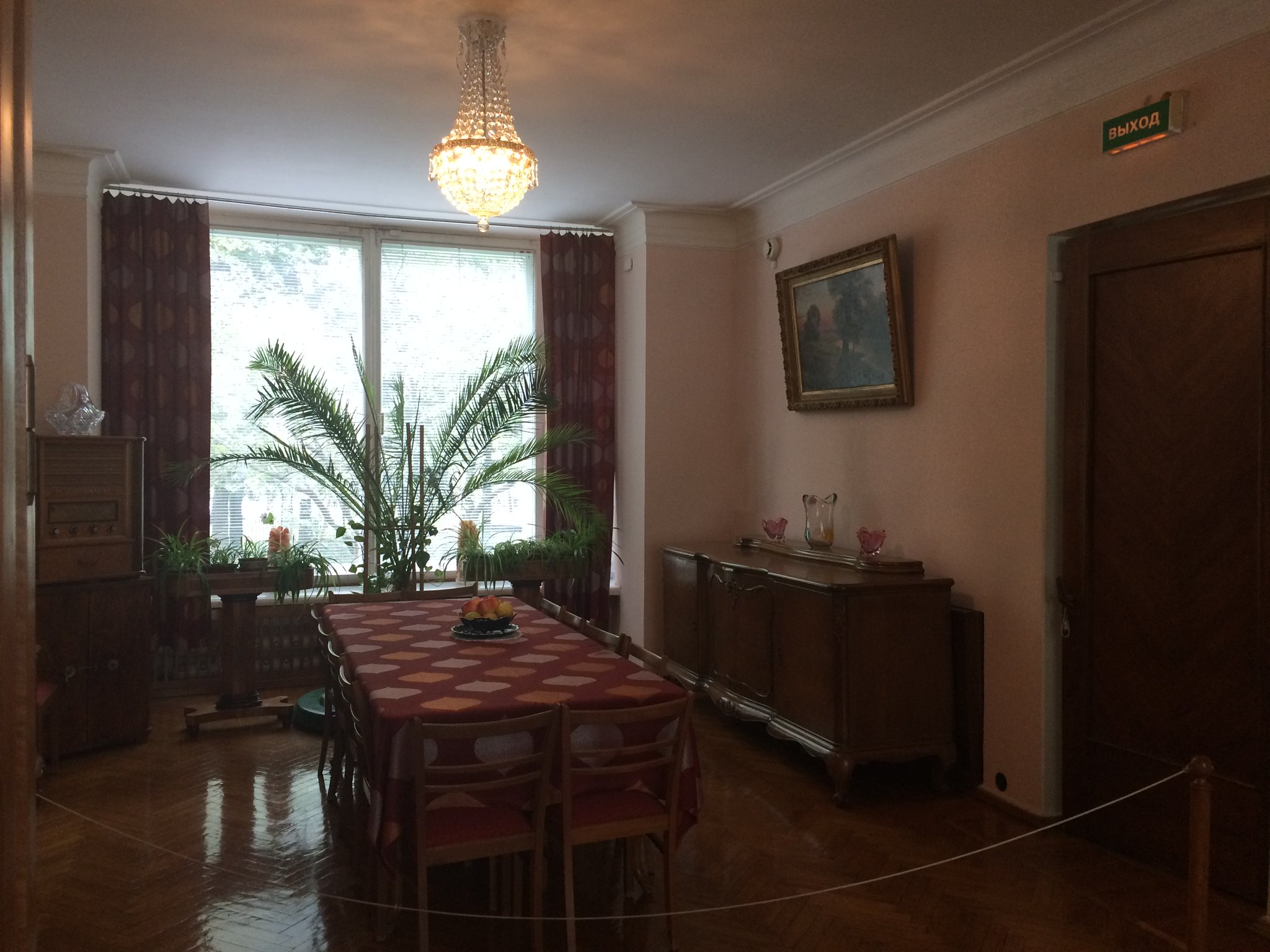 On the first floor is also a bathroom, housekeeper’s room and a terrace, which is closed now. Now we are back to the entrance hall. The door to the living room is made of wood and glass and has shelves for porcelain figurines, that were very popular in Soviet times. 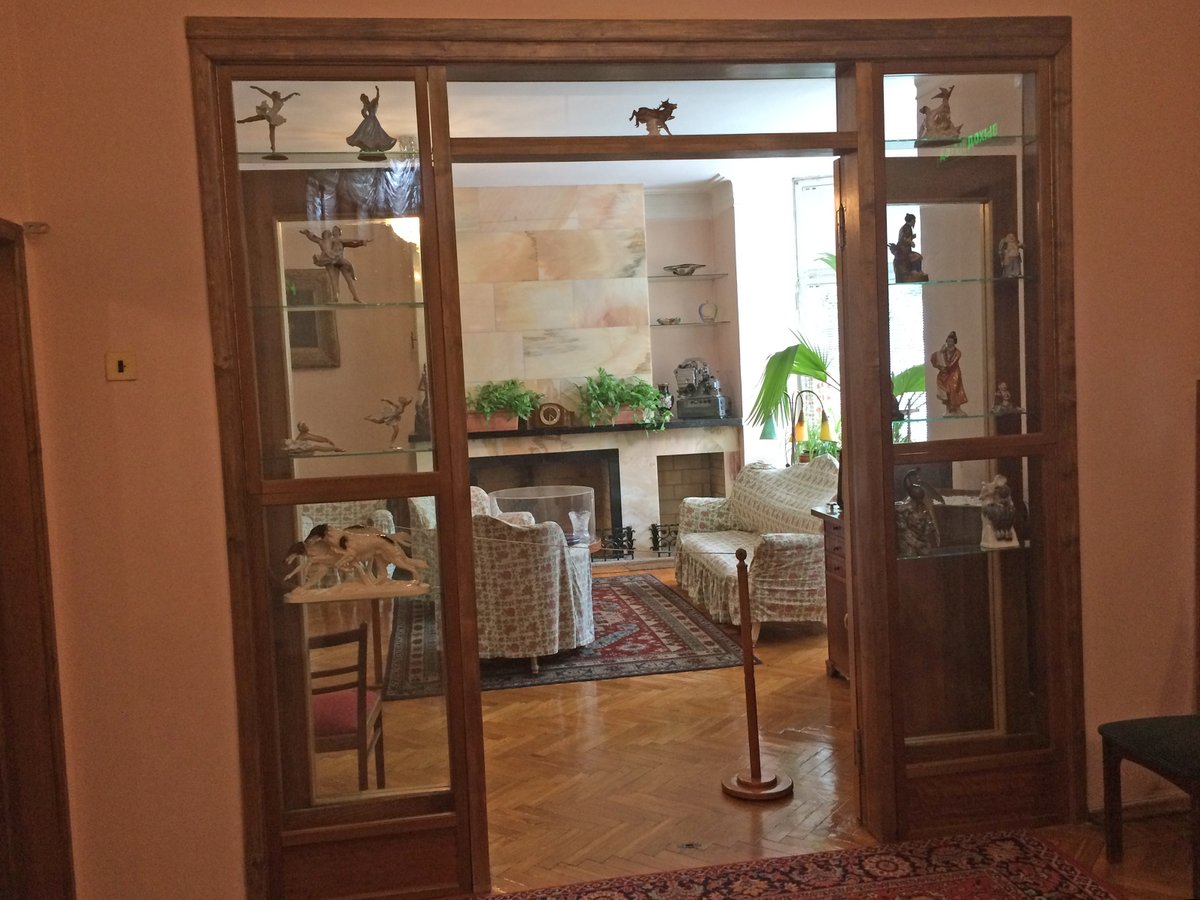 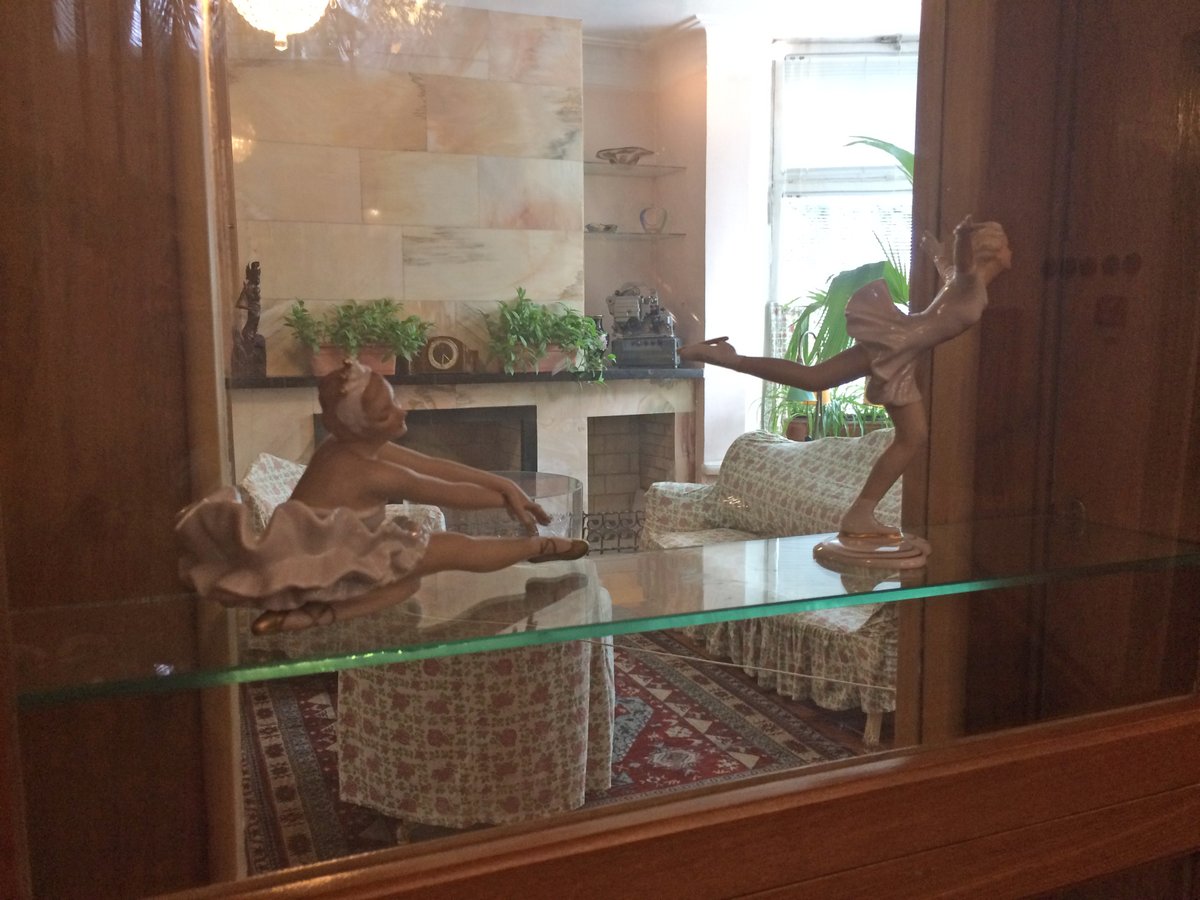 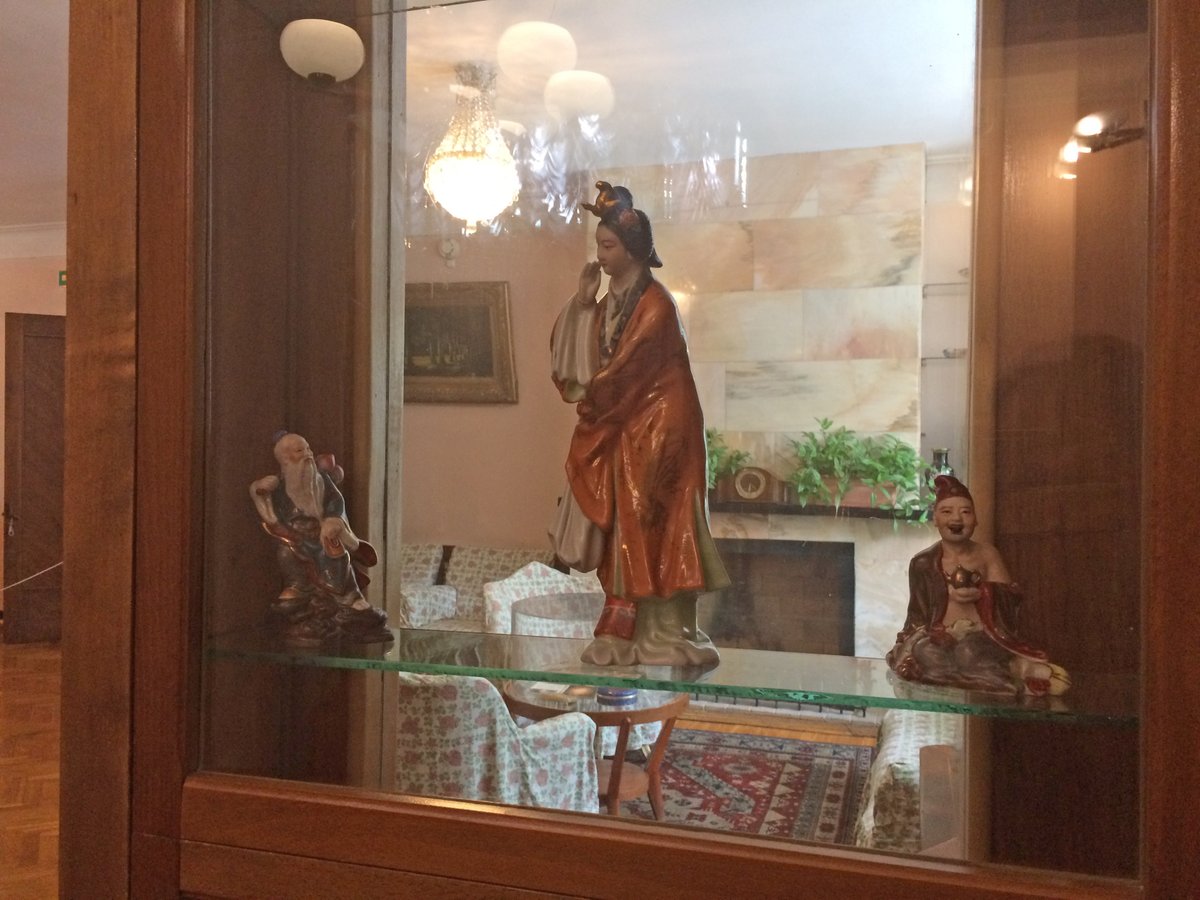 By the staircase you can see a copy of Grigory Postnikov’s sculpture called «To the stars!» with the pedestal featuring the signatures of the first cosmonauts. Let’s go to the second floor! 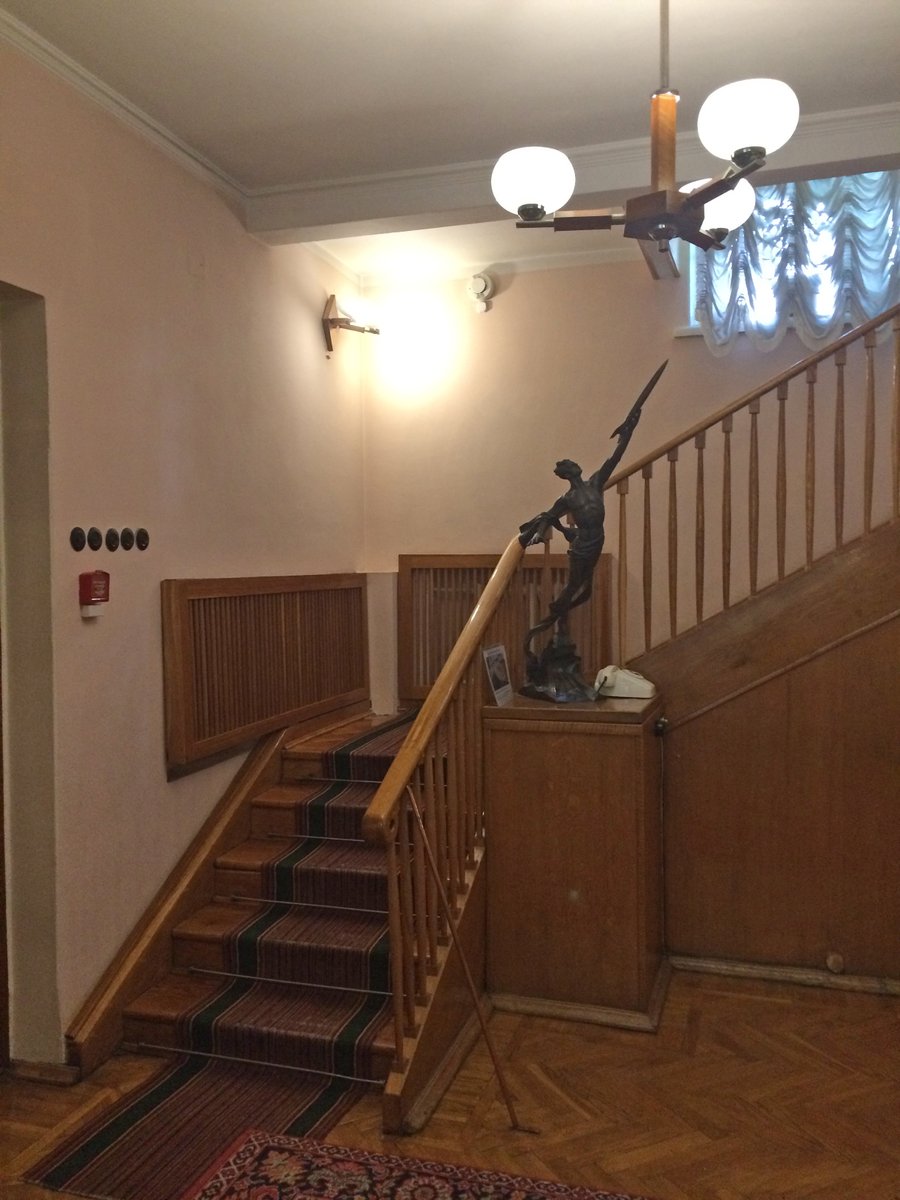 Sergei Korolev’s personal library located on the second floor. This part contains mostly belletristic, and the professional literature is in Korolev’s study. 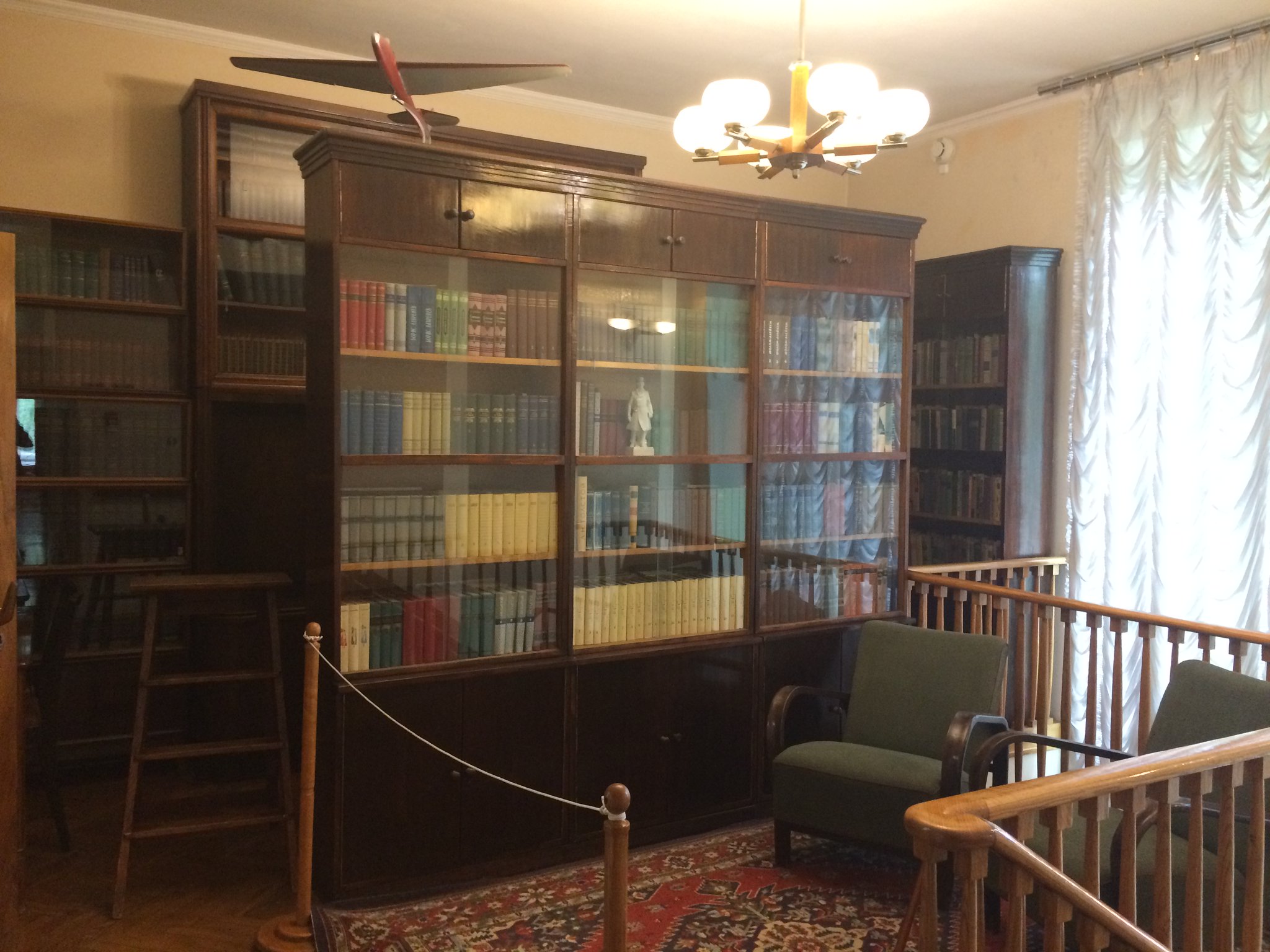 Also we can see a map of the Lunar surface in this hallway. It’s hard to make a good photo, sorry for that. The next door is leading to Korolev’s study. 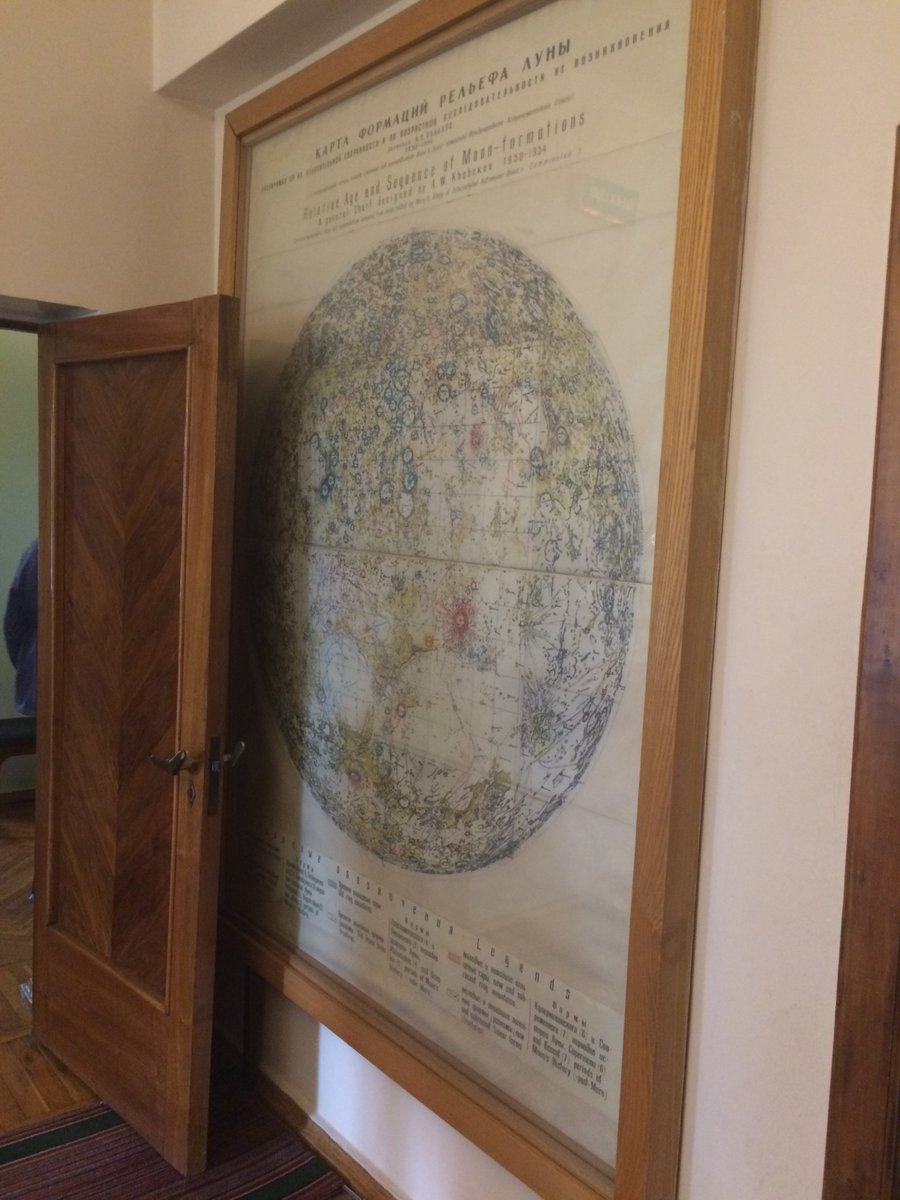 This is Sergei Korolev’s study. Everything here has remained exactly the same as it was during his lifetime. Behind a working table we can see Lenin’s figurine and a portrait of Nina Ivanovna. 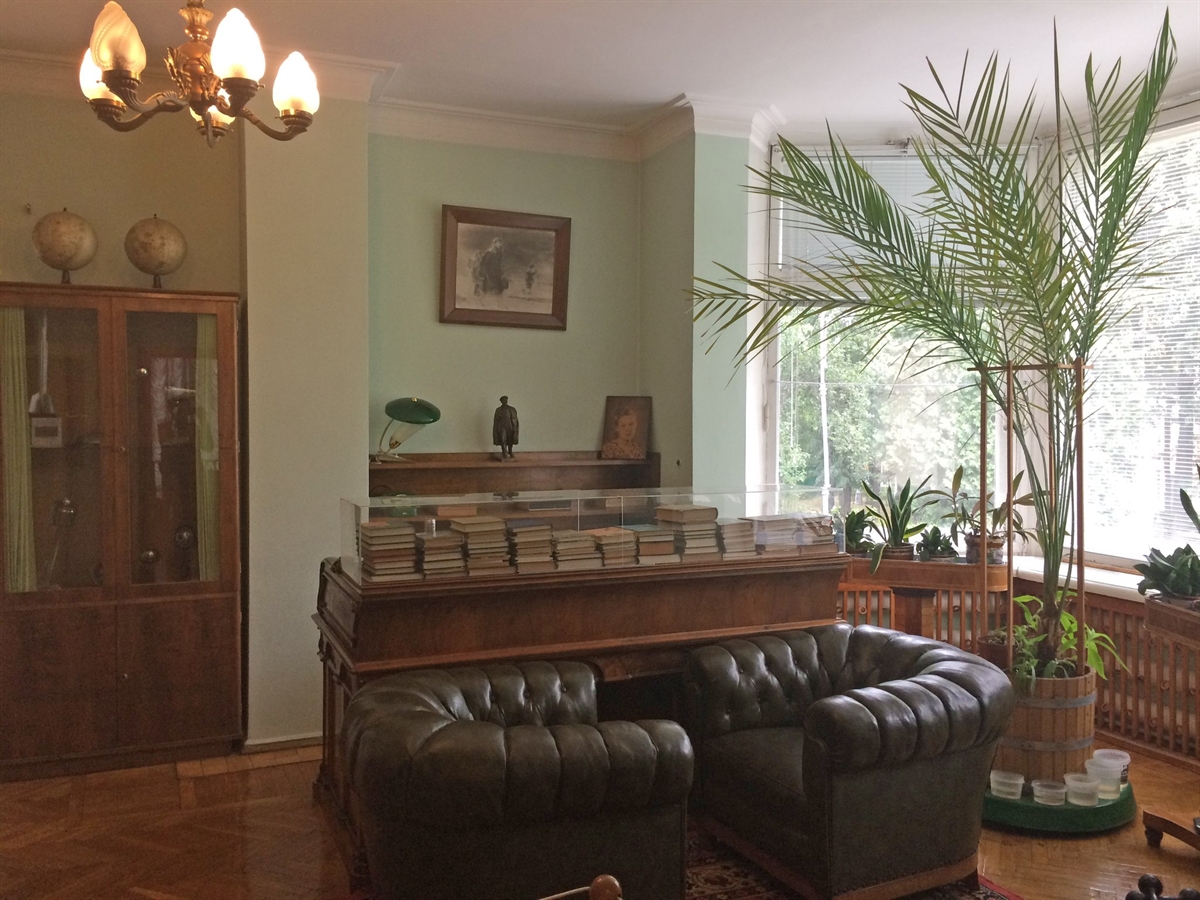 He owned a big collection of professional literature. There are the Lunar globes and rocket models (I see one of the GIRD models in the cabinet), and a chalkboard with a rocket drawing. 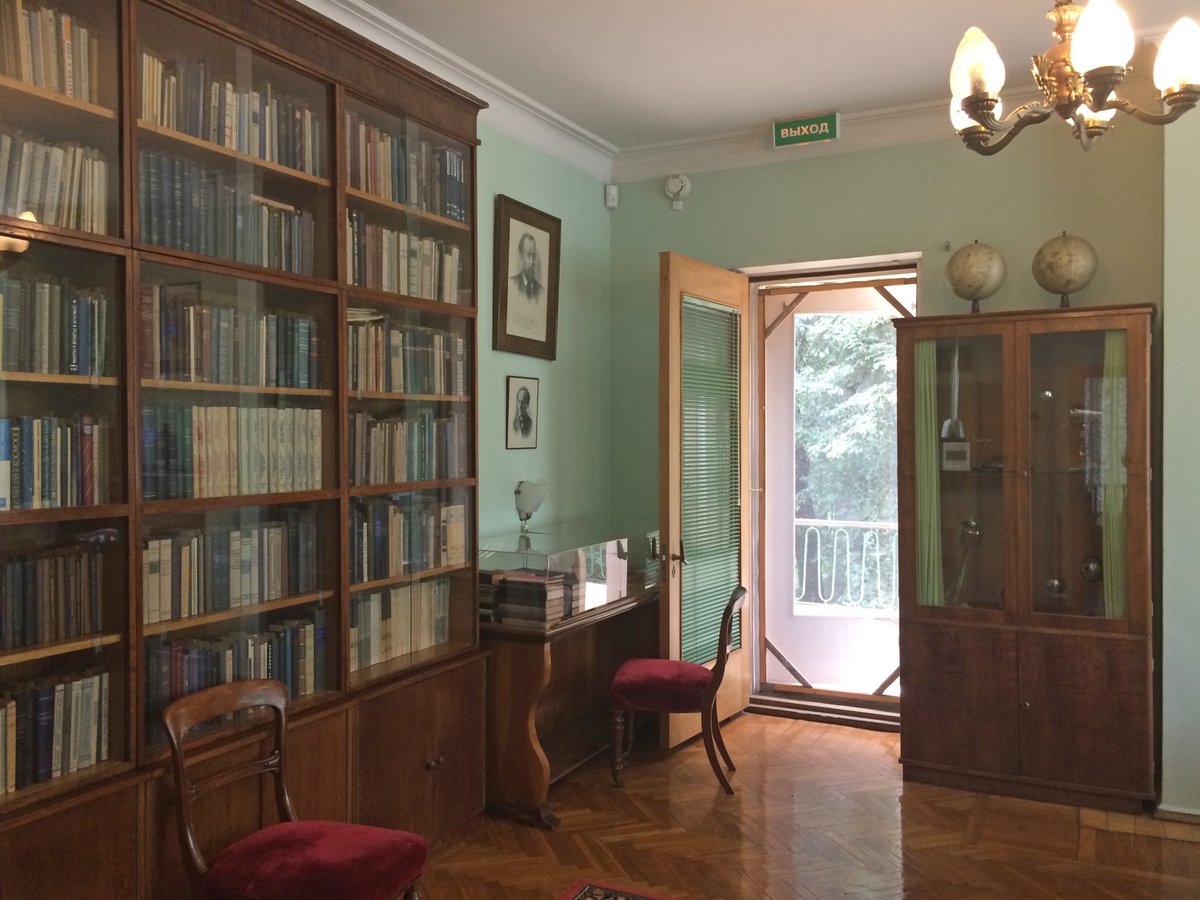 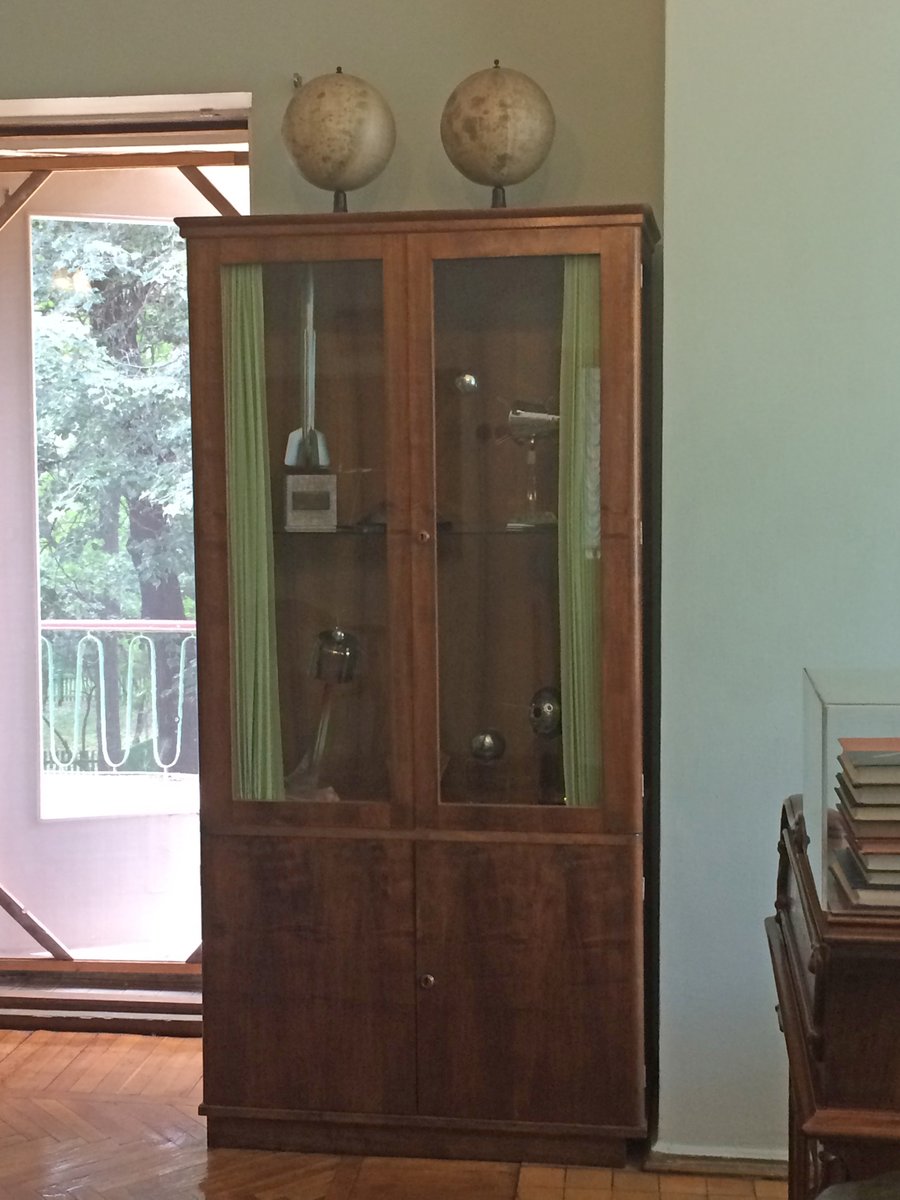 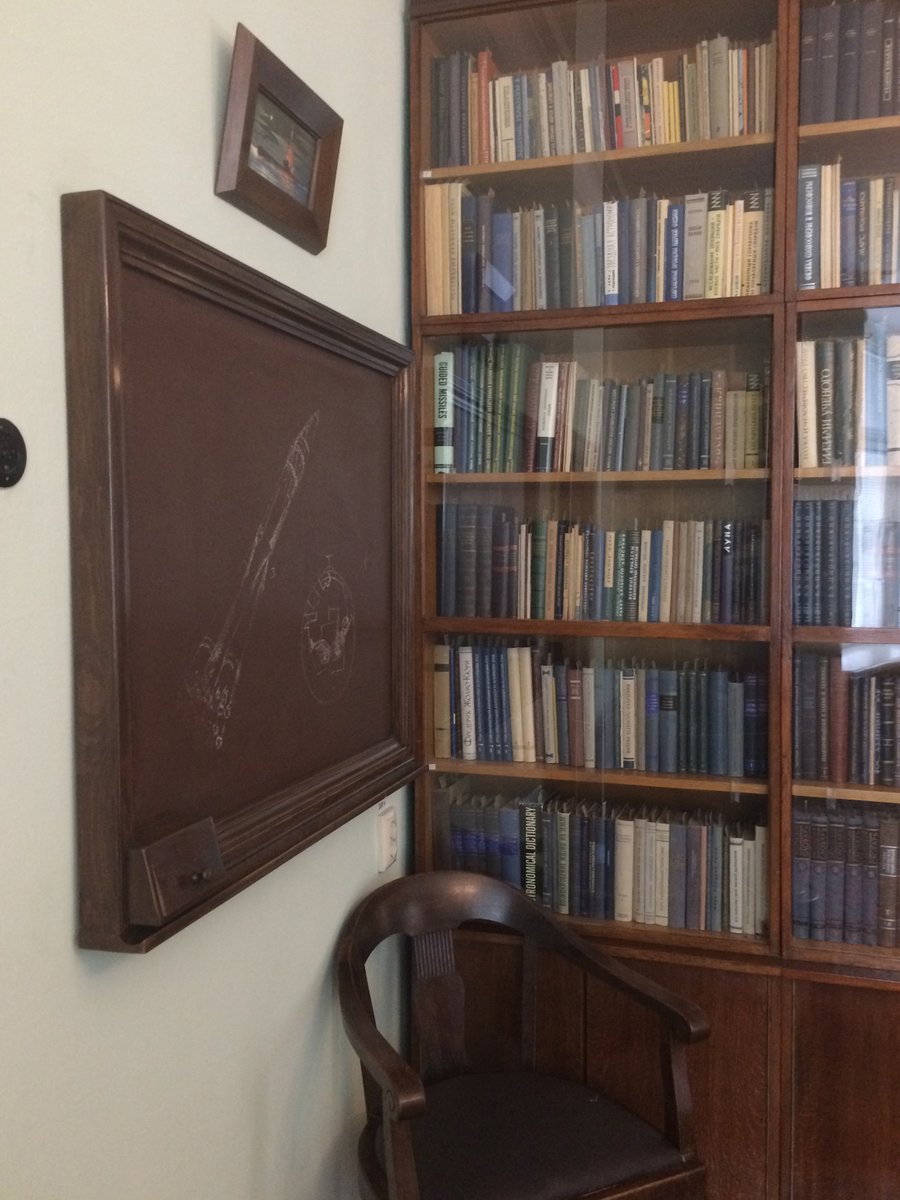 Nice detail: on the floor you can see Sergei Pavlovich’s dumbbells. He regularly did exercises with them on the recommendation of doctors. 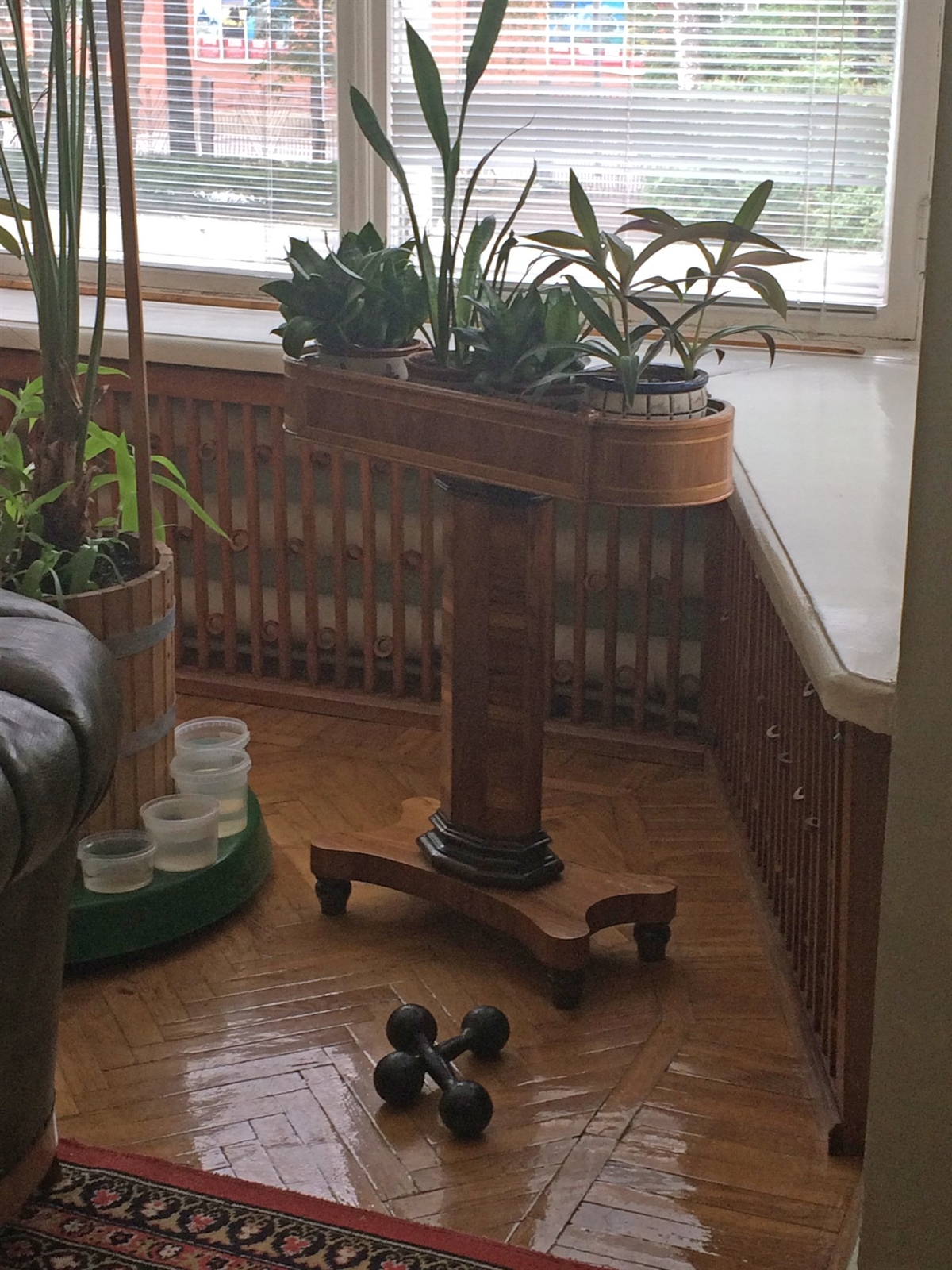 The next room is a bedroom. Here are cactuses, Korolev liked them very much and called them “my freaks” 🙂 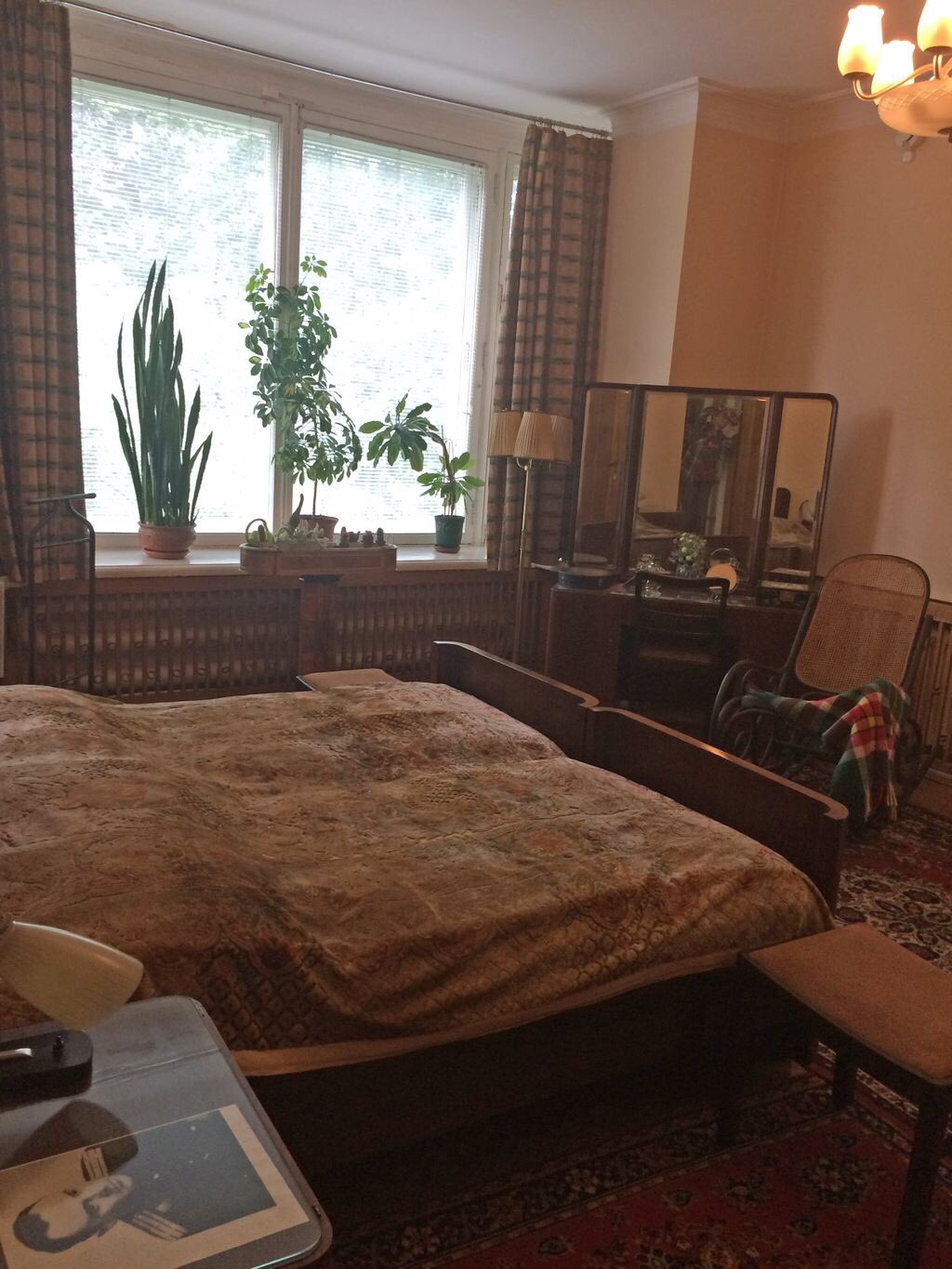 And the last room on this floor was Nina Ivanovna’s private room. She had a portrait of Sergei, painted in the same manner as her portrait in his study. They really loved each other. 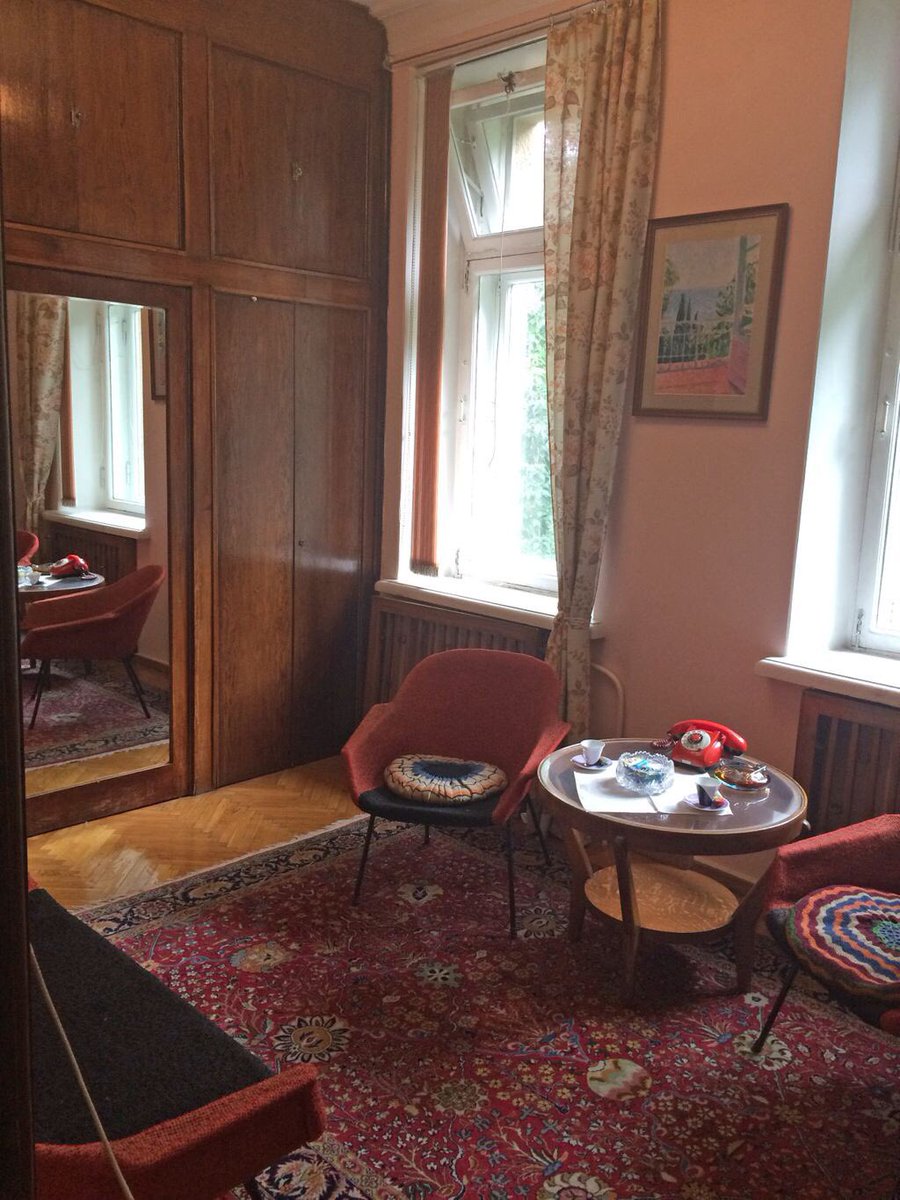 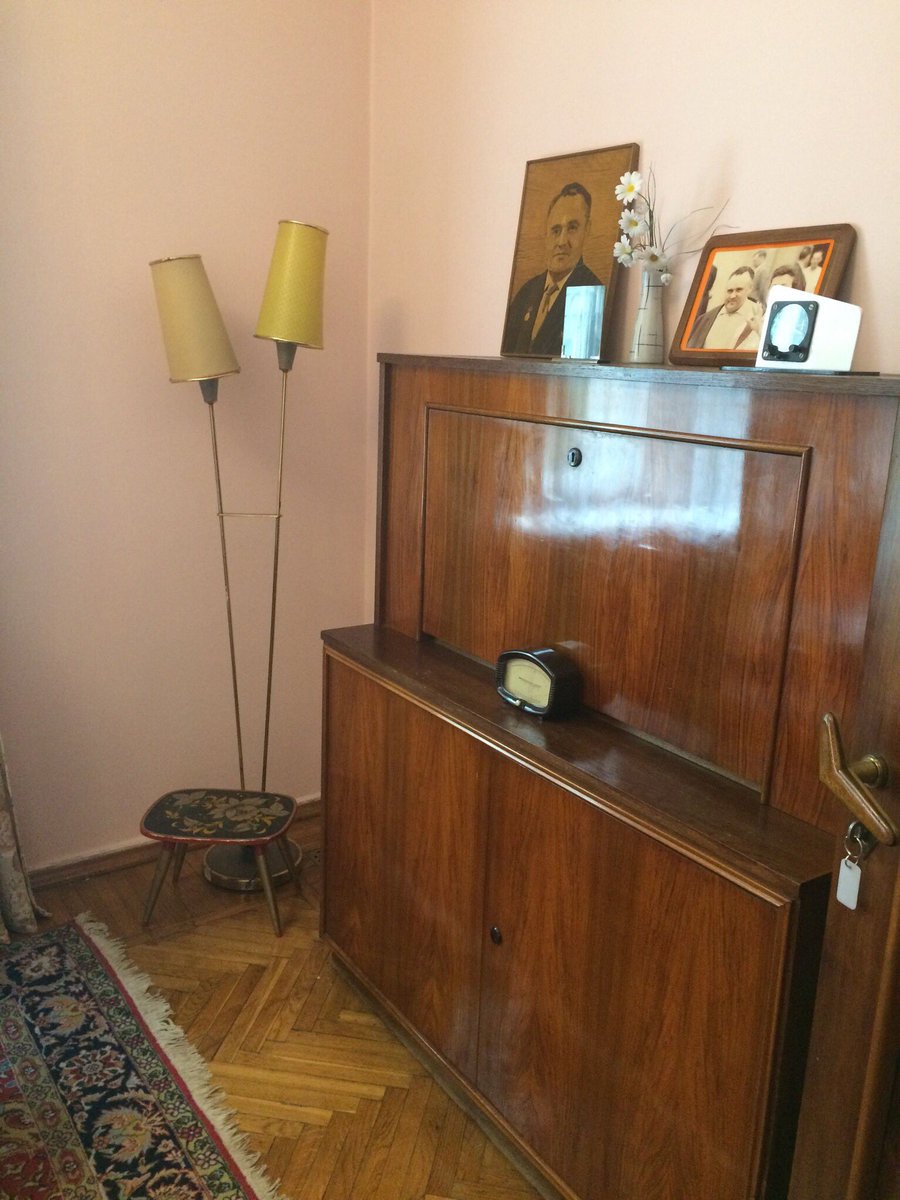 And this is the outside view. 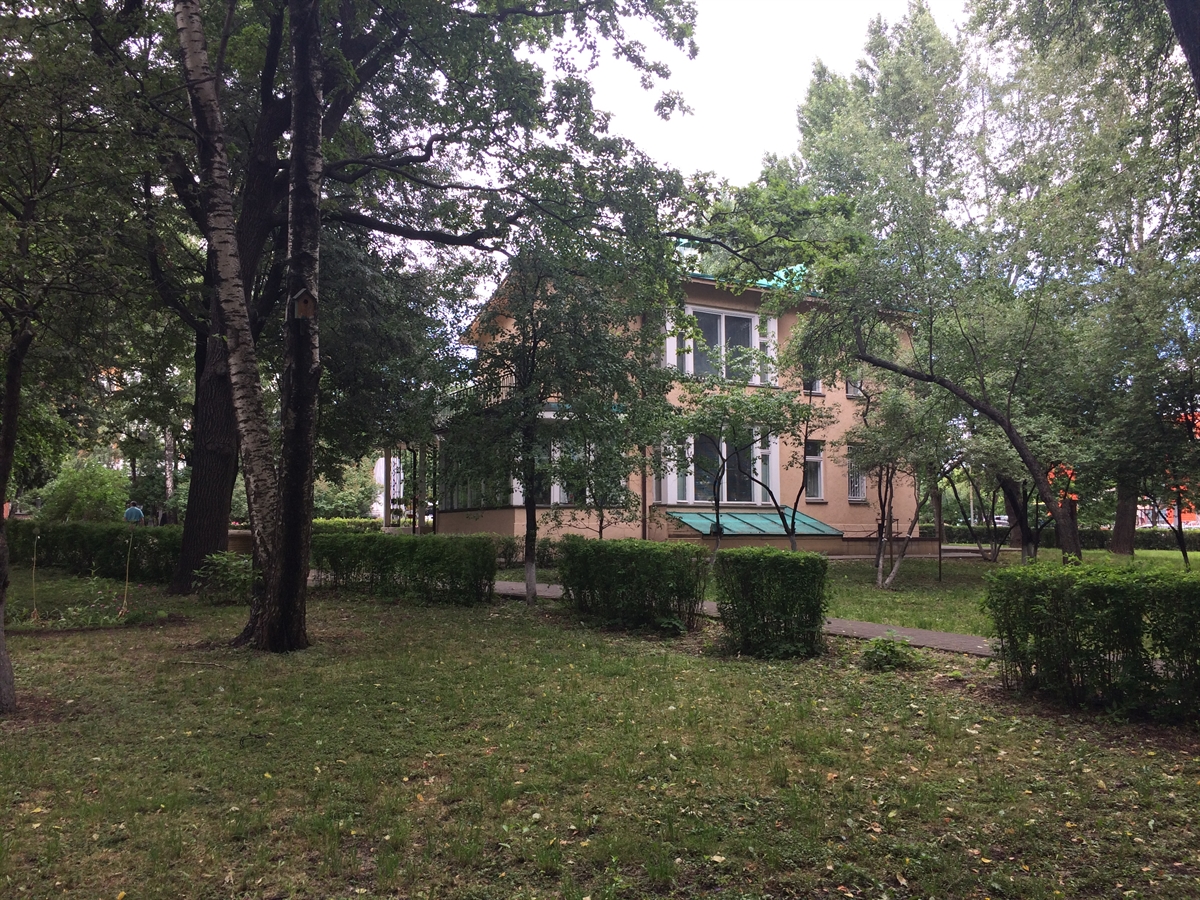 The house is surrounded by a small garden in which there is a gazebo where Sergei Pavlovich and Nina Ivanovna loved to sit. 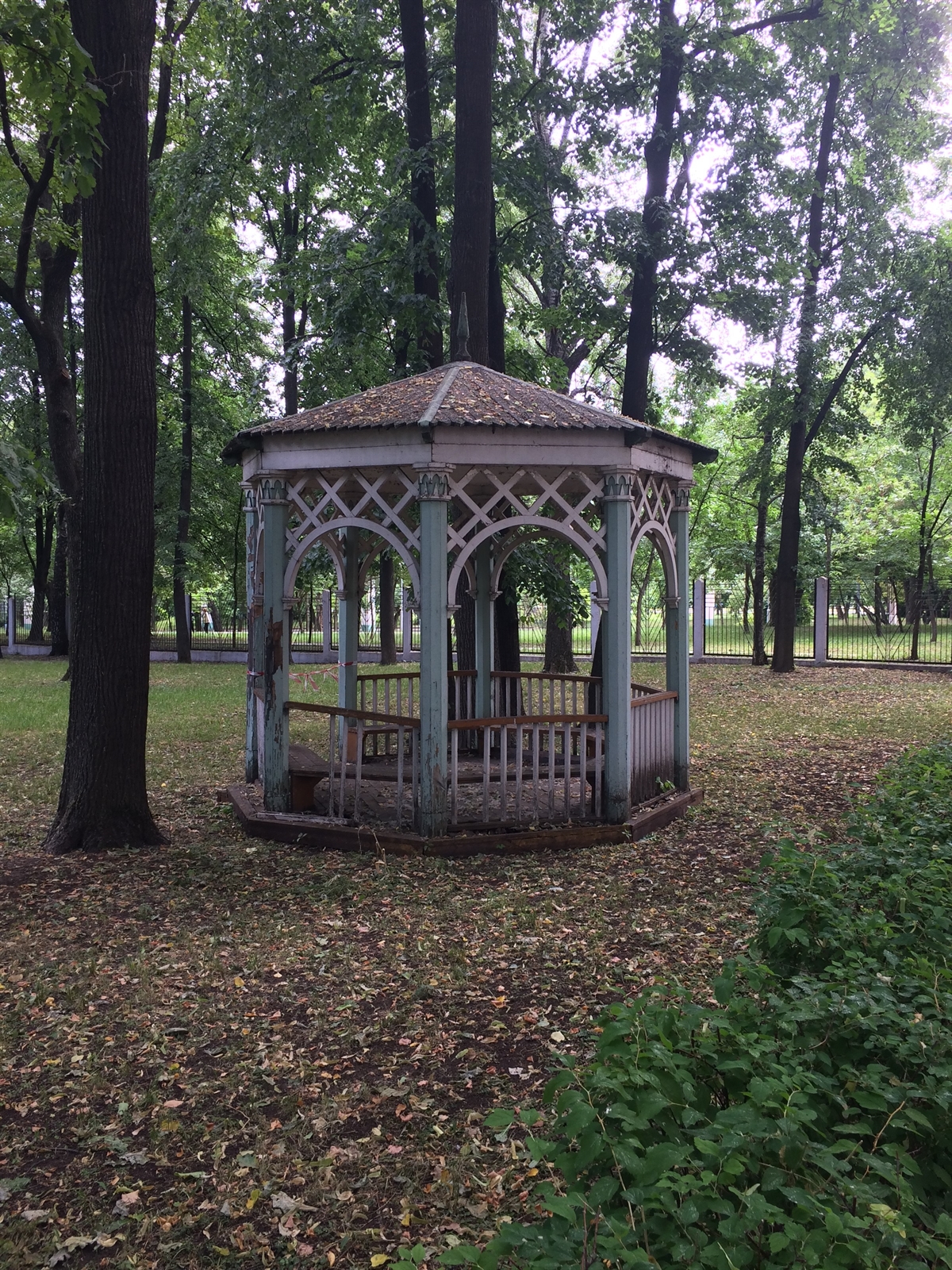 I think it’s all for today. Now you know how the house where the father of Soviet cosmonautics spent his happiest years looks. There’s also a small museum in the cellar, but although it’s small, they have some really rare artifacts there. I’ll show it to you another day.